Ever since the Hunger Games Sci-Fi Dystopias have become the new thing, and suddenly out of nowhere Divergent appears. Divergent takes place in futuristic Chicago, the main character Tris (Beatrice) has just reached her 16th year. In her world, society is divided into 5 factions, now Tris will have to make a choice, stay in the faction she grew up in, Abnegation. Or leave her family, friends and all she has ever known, and be herself. With danger lurking around every corner Tris will make a choice that will change her and her world forever.

I asked LVD Middle Scholar Hannah C., who has read Divergent twice so far, if she would recommend this book to other Middle Scholars, and she said “DUH”. She gave Divergent a 9.5 and said she know more than 7 people who has read it. And everyone is talking about the movie that comes out on March 21.

Set in a world were being different can get you killed, you meet and amazing cast of characters. Enter a world that is so familiar, yet so horribly different, will leave you begging you for more.  Join Tris on her journey in a world that has captured the hearts of millions and where nothing is ever as it seems. 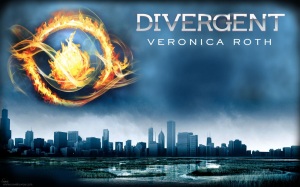