Between the seasons of fall and winter, plenty and paucity, life and death, Halloween is a time of celebration and false belief. It is thought to have originated with the ancient Celtic festival of Samhain. That is when people would light bonfires and wear costumes to ward off roaming ghosts. A long, long time ago in the eighth century, Pope Gregory III titled November 1 as a time to honor all saints and martyrs .The day before was known as All Hallows’ Eve and later Halloween. Over time, Halloween emerged into a secular, community-based event characterized by child-friendly activities such as trick-or-treating, dressing in costumes, and carving pumpkins (jack-o-lanterns). In numerous countries around the world, people continue to usher in the winter season with gatherings, costumes, and sweet treats.
I interviewed four students about what they thought was the history of Halloween and this is what they said. 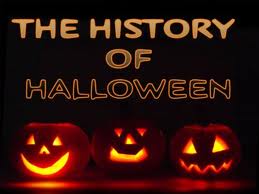